We live in the world which is full of stinginess, lots of expectations, we cannot expect something back once lost, may it be a thing or a person or any immaterialized matter. Reasons for losing it may be many – negligence, ego or whatsoever! I wanted to share a real short incident that happened with me recently, an eye opener for me at least.

One evening, we realized that we are out of money and wanted to withdraw some from an ATM, which is like 20 minutes away from my place if we go by walk. When we went to that ATM, we saw a big queue out there. With having no other option, we stood in that queue & were waiting for our turn. After we joined the queue, many more people joined behind us.
At our turn, we went in and withdrew some cash, started walking back to our house. Half way through (about 10 minutes later), we thought why not we go for a long walk, & started walking slowly. We walked like 2-3 KMs away from our house, for over 30 minutes and started walking back to our house.

On the way, we thought of buying some stuff & went to a store, picked up stuff, went to the cash counter to pay for them. We then realized we don’t have money with us! WTH!!! Checked every where, in all my pockets, yet no luck – concerned & confused thinking where did I keep that money.

We’d a strong feeling that once lost is lost, especially in today’s world. Even if you lose 100 bucks, it’s considered gone. Someone would have picked up & went away. But wanted to give it a try, walked back all the way towards ATM point, looking here & there on the road side like a mad person. As we approached ATM point, we almost lost hope that we won’t get them back. Still went nearer to the ATM, there were no single person standing there, as it was over an hour that we initially came out from the ATM.

Disappointed & irritated on myself that why I do this all times, negligence!!

As we approached the ATM, a lady, youngster of early 20s covered her face with a scarf completely, walked near to us and said “I was waiting for you here since long time!“ 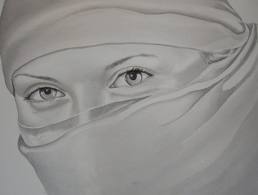 We were traumatized, we didn’t even know that lady earlier & weren’t sure what she meant by that. She continued talking to us – “You are the one who lost the money, right? When I went inside the ATM, I found the money down on the floor. I picked them up & started looking for you, but with no luck. Since then I was waiting for you here & I was sure that you guys come here again!”


Strange & bewildered feeling! When we were standing in the queue, we did see who was standing just behind us & didn’t find any girls there. And we were sure there was no girl behind us in the queue. If she was in the queue like far behind, there were people who were just behind us, would have went inside, & didn’t find any money down there?? I mean how come? No one else finds money in the ATM cabin, & only she finds them when she wasn’t just behind us? The thing is I checked my pockets after we walked like 200 meters from the ATM cabin & they were right in my pocket. She was saying she found them in the ATM cabin itself!!

We were in some kind of unusual yet good feeling, thinking how good that person would be who picked up the money, waited for so long time at the petrol pump for someone whom she doesn’t even know at all?? I mean, would you do that if you were in her position? I’m not pointing out your honesty, if we were really honest and don’t want to pick other’s money, we would have handed that over to petrol pump station guys & would have told them to return when someone comes in searching for them.

And you know she also told us – “I wanted to hand them over to the station guys, but then I thought they would not be honest in returning them back & hence I was waiting here“ – who would do that in this current world? A lady at late night? Will you? I myself wouldn’t be doing that – waiting for long, with an intention to return that money back to whoever comes there searching for them.

We were very thankful to her & were willing to thank her in whatever the way we can at that point of time. We asked her email address at least to be in touch with such a wonderful person with succha wonderful feelings & thoughts, but she was like refused to tell us her name. We didn’t know how to thank her, my cousin offered her some money from the total amount just as a token of gratitude, because we weren’t able to think of anything else than thanking her in some form. You know what she said – “If I needed money, I would have taken all & gone without waiting for you here at this time.. “ – We knew that, but still you know….

We tried asking her at least one form of contact or even name, but she refused to give her details & said – “Your blessings are  just enough...“ – Touching…

Saying that, she started walking away from us, we just stood by the road side, astonished, watching her, adoring her helpful nature from inner self. She slowly vanished out of our sight… We were like wondering is it really true or some kind of dream!! I mean, if someone in this current world is really good, he/ she would have gone to police station & handed over that money to them or to petrol pump guys or some other alternative which would have been easier, without having to wait for someone for a long time. She was like an angel for us, who helped us with loads of humane feelings, she also said – “I felt you must be in real need of that money & wanted to give it back to you at any cost…” – How divine!!!

Her statements sounded false to us – that she found the money inside the ATM cabin, she was just behind us in the queue – both were not true. But her had nature impressed us like hell & let us fall in love with her attitude. One thing that hits my mind is she must not be some mortal creature (Do you think I feel crazy?)… I still don’t believe that some human, living in this cunning world, did all this for some stranger!! Whatever it is, it was an awesome emotional touching experience. Unfortunately we couldn’t make our thought happen to keep in touch with her.
Help Someone, You feel good 🙂

I mean in today’s world, when someone met with an accident & in a horrible condition, on the road seeking help from someone very badly, no one approaches that person for any help so easily; Where there is so much of frightfulness in doing anything; where people are so freaking selfish – Does people like the one I’ve encountered really exist? I know for sure that I’m neither good nor a perfect person. Do you claim yourself one of those kinds? Or did you come across such incidents or people like her? Well, I am guessing there would be a majority of ‘NO’s when I take a voting for this question, which you would also agree with eventually.

To her: We hope you will read this blog sometime, we wanted to thank you for whatever you did to us. It’s not about money that you returned to us (we already lost hope that we will find them back), but it’s about your way of thinking to help people without any expectations in return. If possible, we would like to be in touch with such a wonderful heart. We don’t want you be anonymous to us & named you as SMRITI (Remembrance) 🙂 Hope you like it or even if you don’t like it, hope you will respond to this blog with your actual name 🙂

I came across this over web and adored it:

Oh Goddess of all Godesses, you are one who takes many forms, who is all powerful and worshipped by all. Oh Goddess Durga, I Salute to you and plead with you to save and protect us from all fears.

PS: Pictures here are taken randomly over web and not not owned by me. No plagiarism is intended 🙂